The Alumni Varsity Association is one of the oldest affiliates of the City College Alumni Association. Our members largely come from the ranks of former varsity athletes, coaches, administrators and friends of the City College Athletics program. The board of directors, all former varsity athletes at the College, includes teachers, coaches, administrators, lawyers and doctors.The AVA supports various programs and events all designed to acknowledge and support the efforts of today’s varsity athletes. All alumni are free to join as long as they are interested in supporting the athletics program. If you are interested in joining the group, please email membership@ccnyalumni.org.

The Athletics Hall Of Fame

One important aspect of the AVA’s program is the administration of the City College Athletics Hall of Fame. Each year the AVA board of directors considers and votes on nominated candidates for the Hall. Nominations are invited from everyone and are considered each year. Once elected to the Hall of Fame, inductees are honored at the yearly Hall of Fame Dinner and Reunion, normally held in May. Each inductee has his/her name placed on an inscribed plaque in the City College Hall of Champions, located in the south entrance to the Marshak Science Building.The basic nomination form can be found below. Nominations should be only for individuals who achieved superior success while representing the College in athletic competition. Acclaimed achievements from an individual’s post college career can also be included in the nomination. When making a nomination, we ask that copies of relevant news paper articles, awards, etc. be included as the AVA does not have adequate staff to research unsolicited nominations.

The Hall of Fame Dinner and Reunion

Each spring the AVA salutes and honors the new inductees to the Athletic Hall of Fame, presents individual awards, and honors individuals and organizations that have provided exceptional service and support to New York City’s sporting world. The dinner is usually a sold out event held each spring that brings together the large City College athletics family. It also serves as a venue for team and individual reunions. 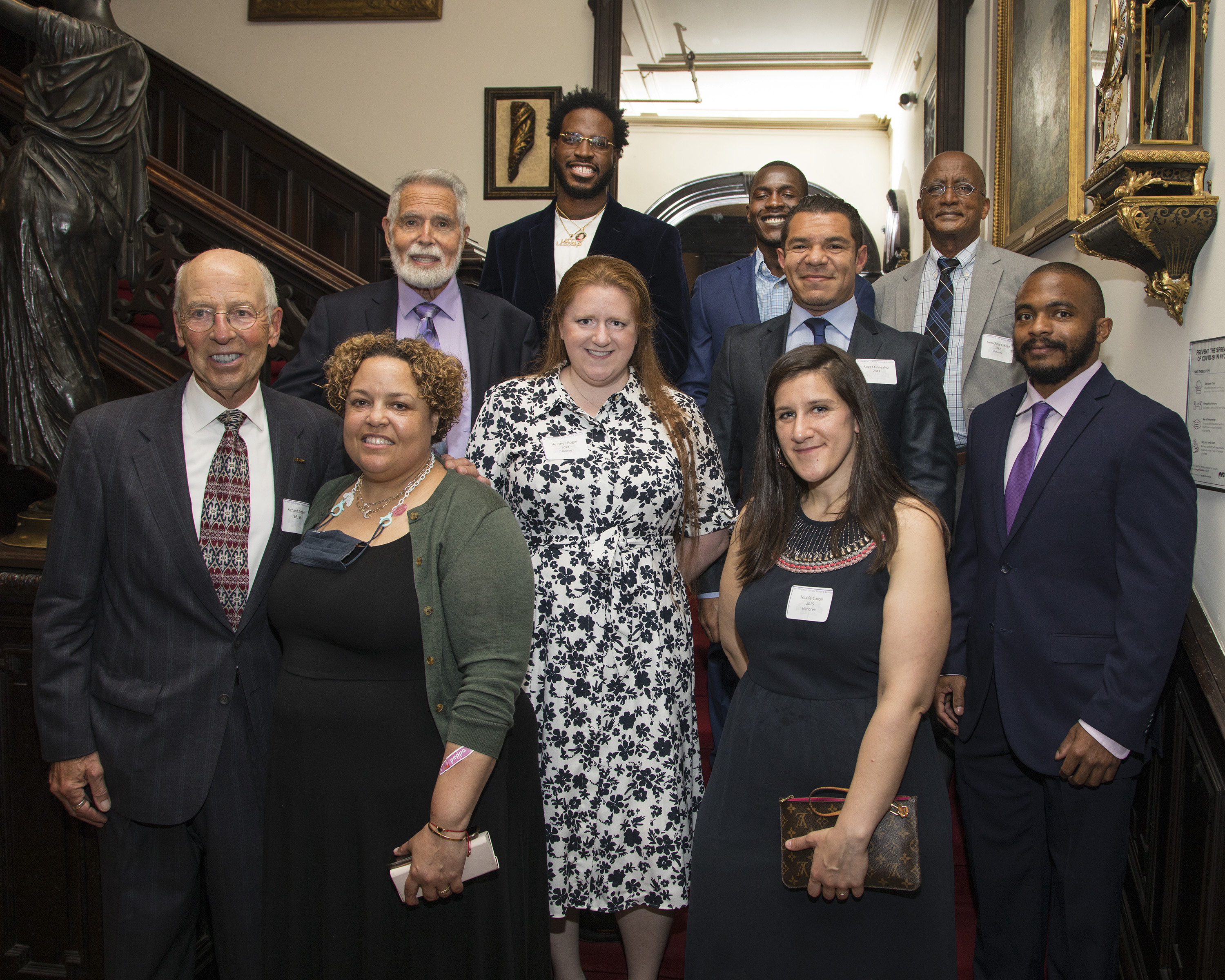 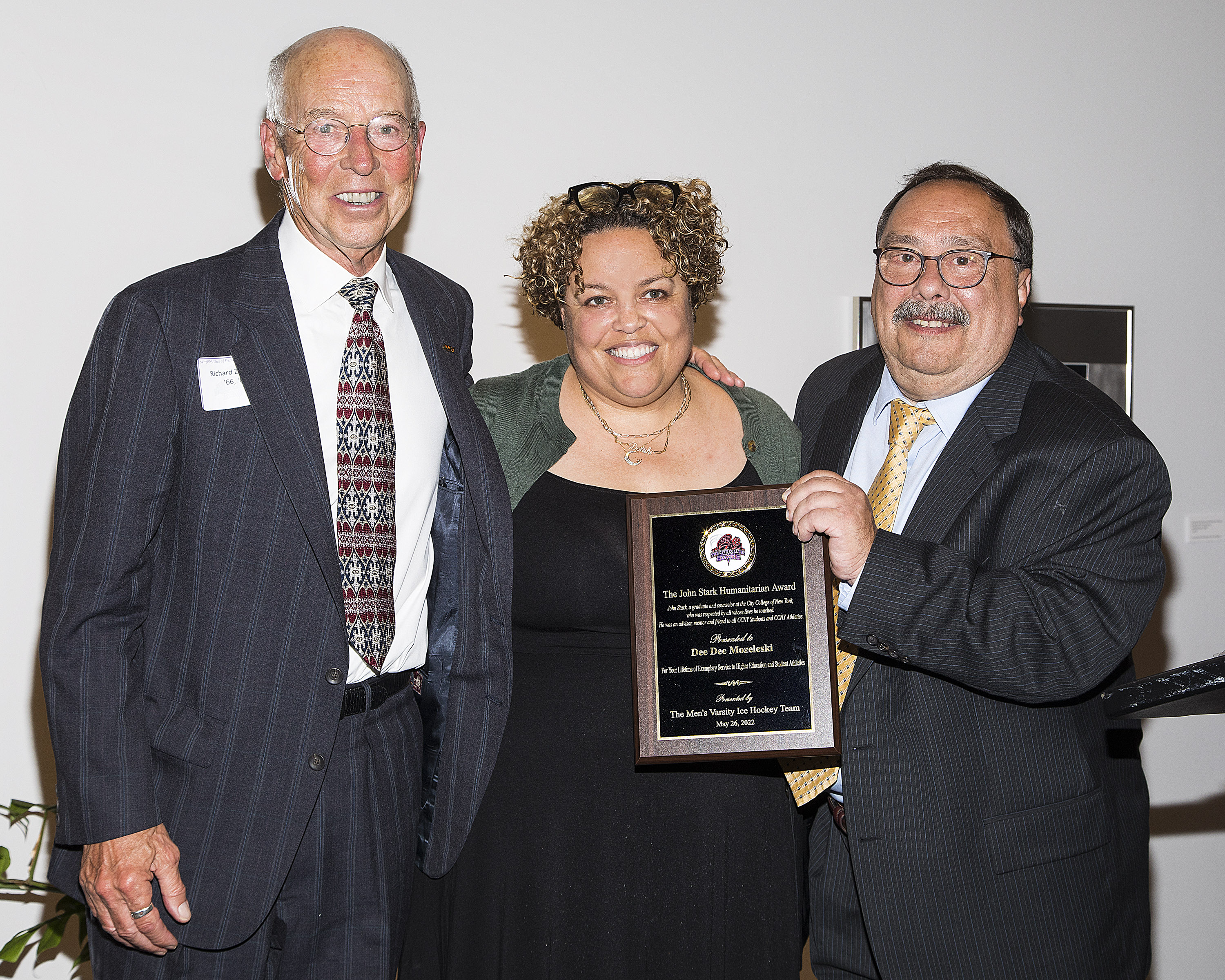 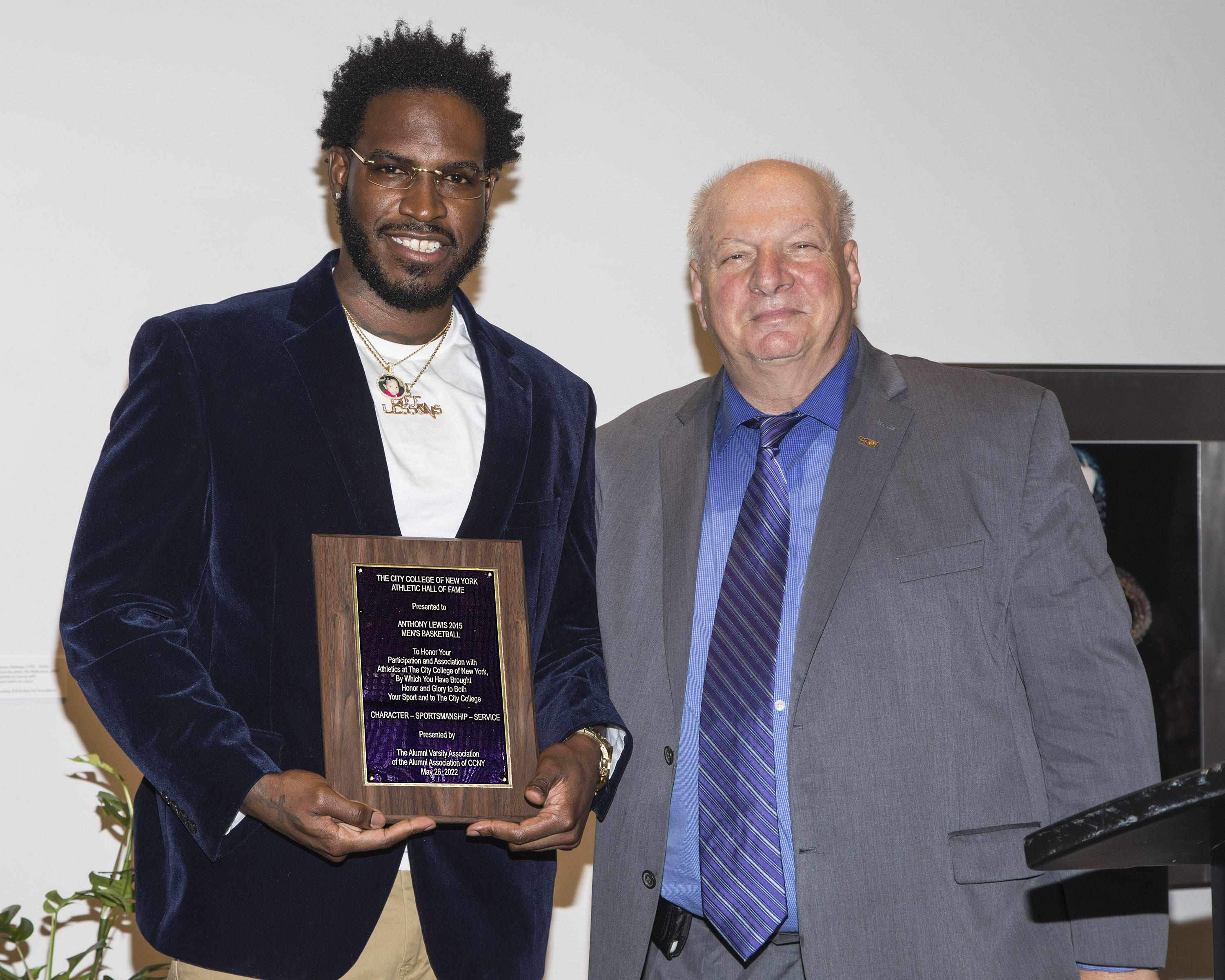 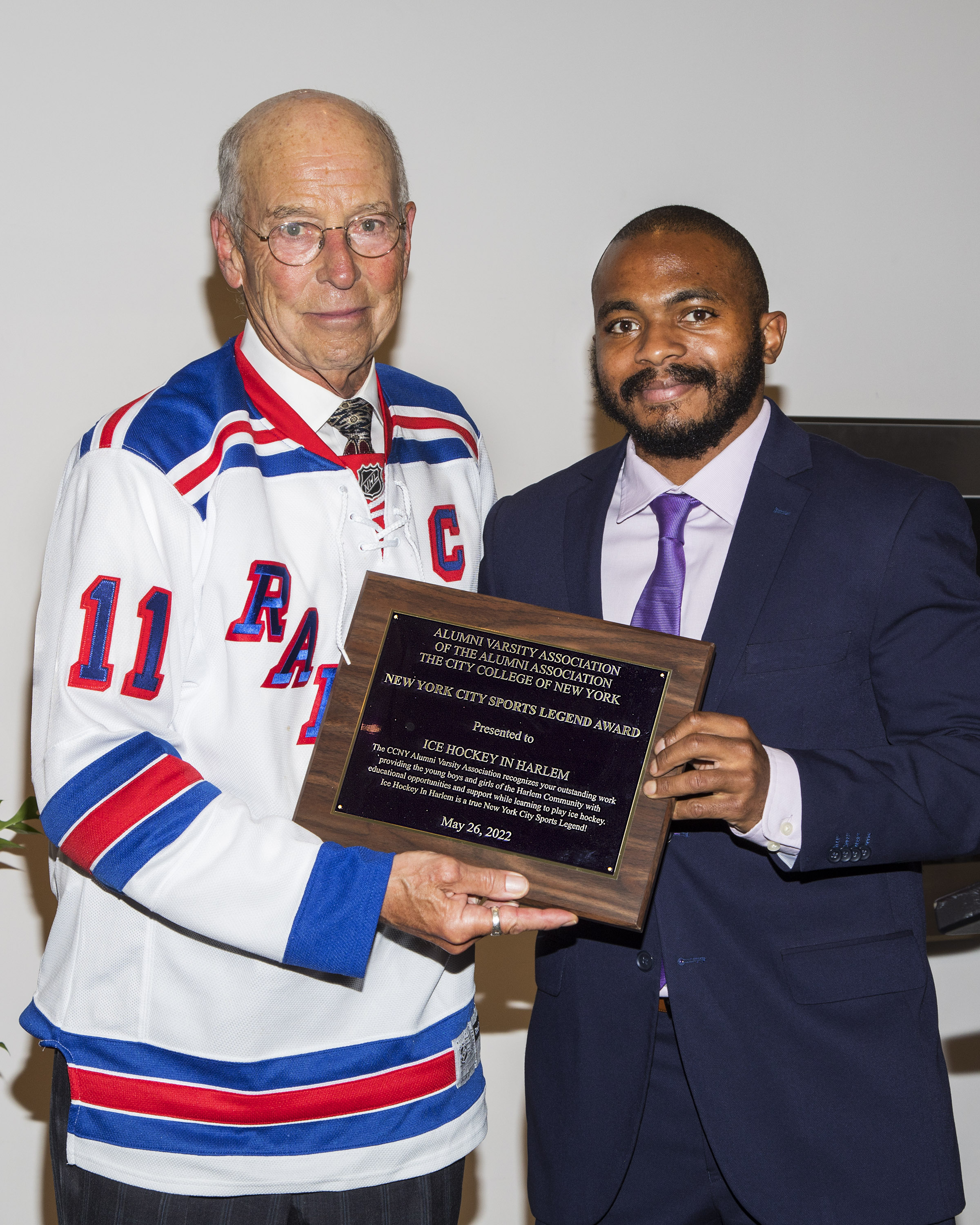 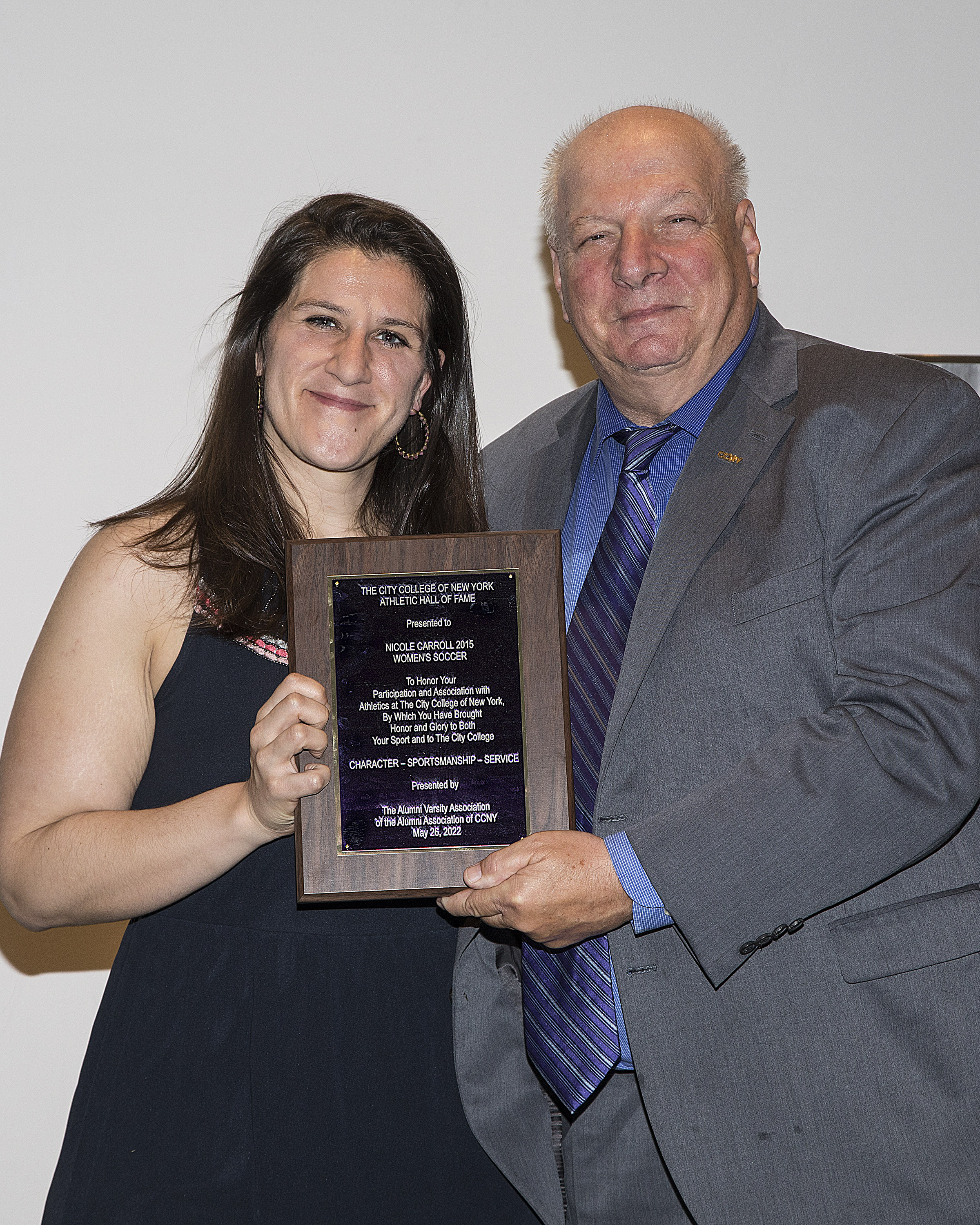 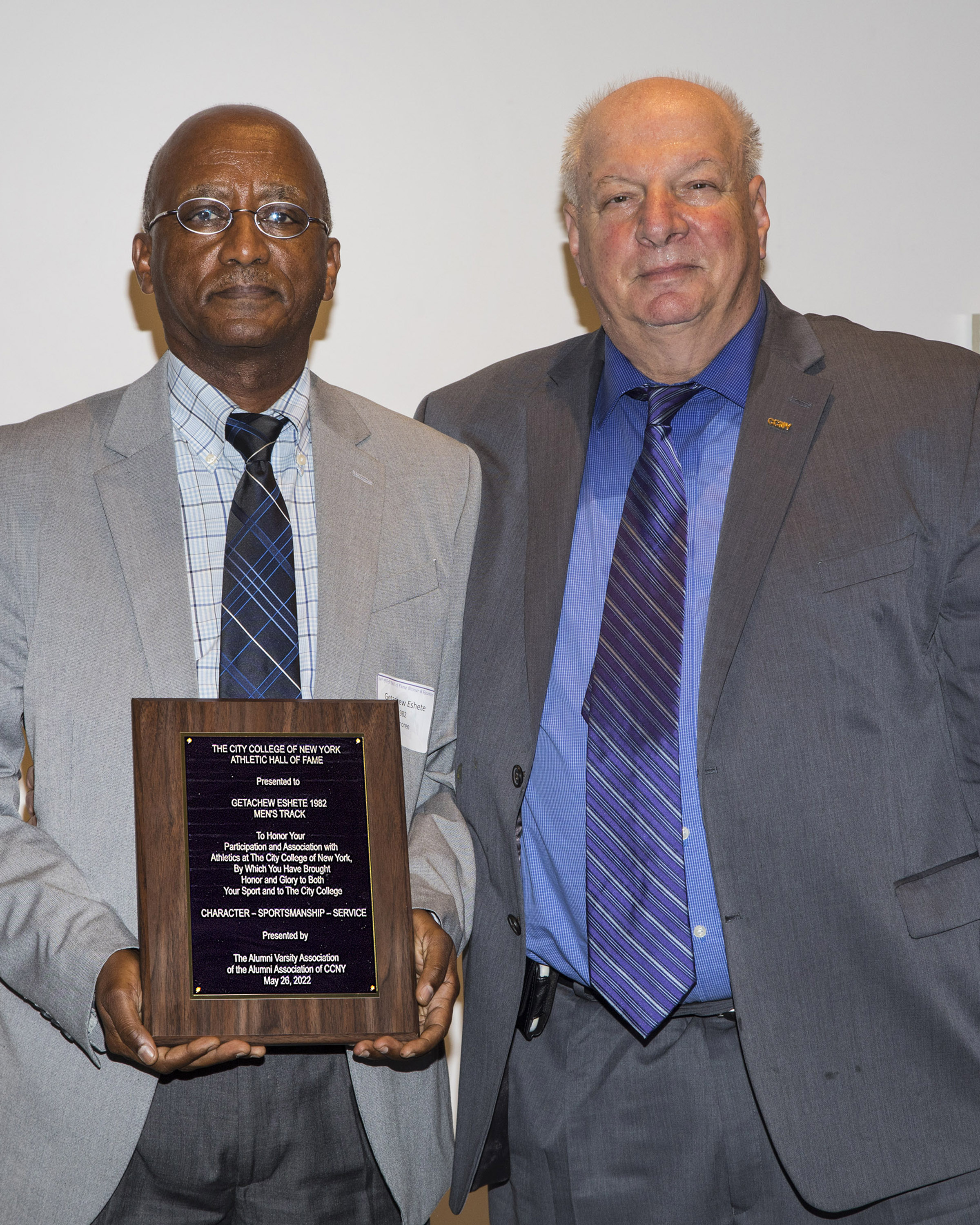 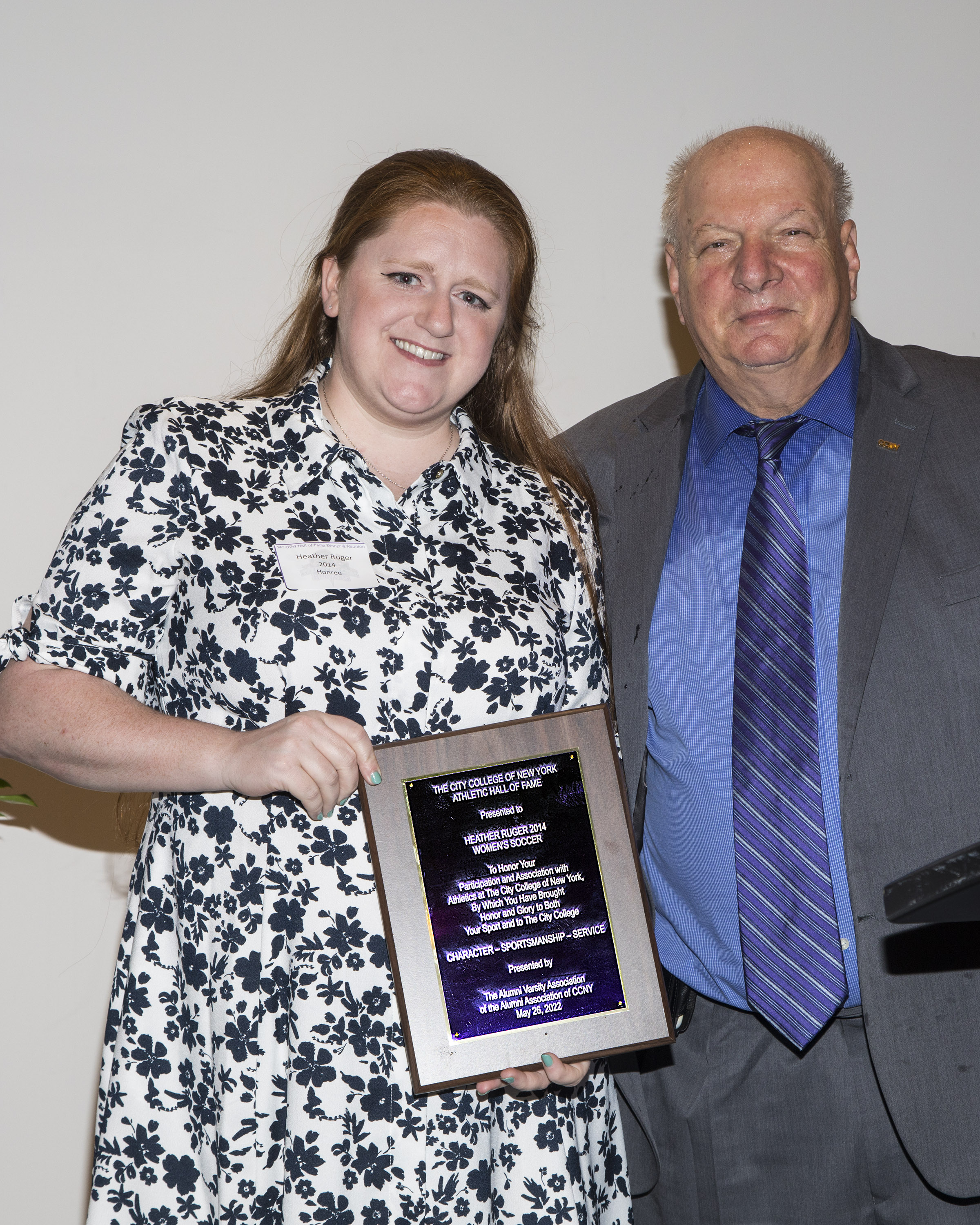 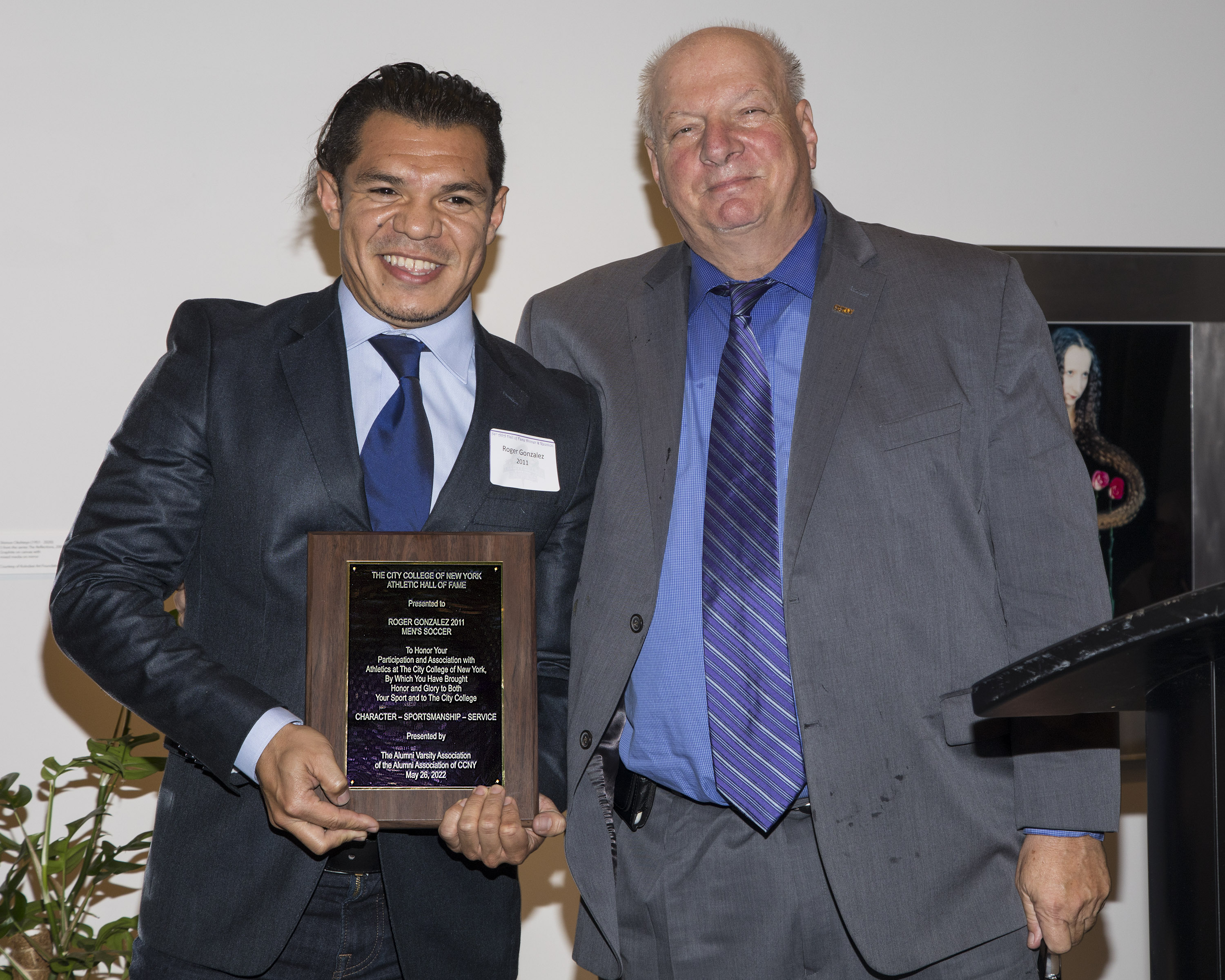 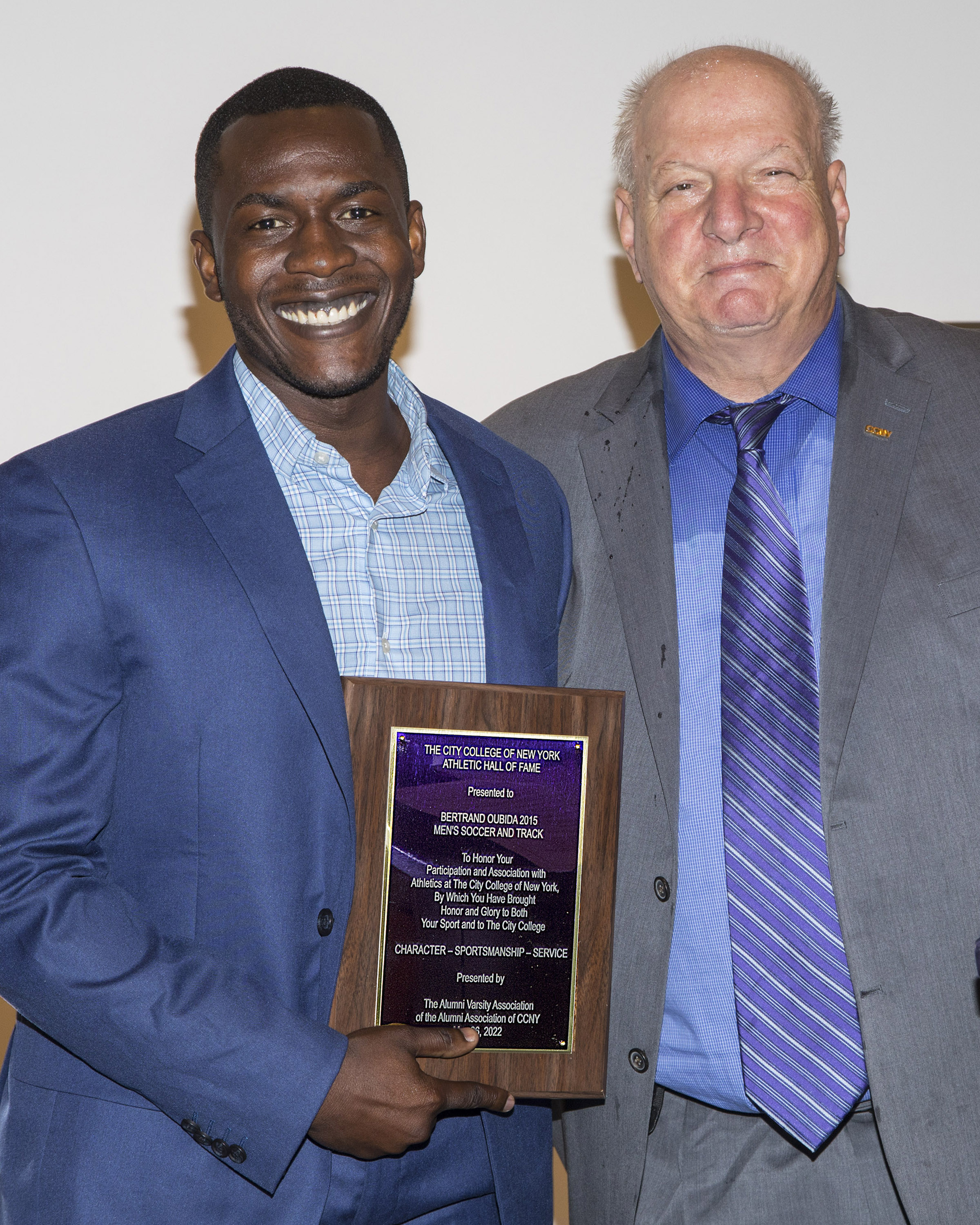 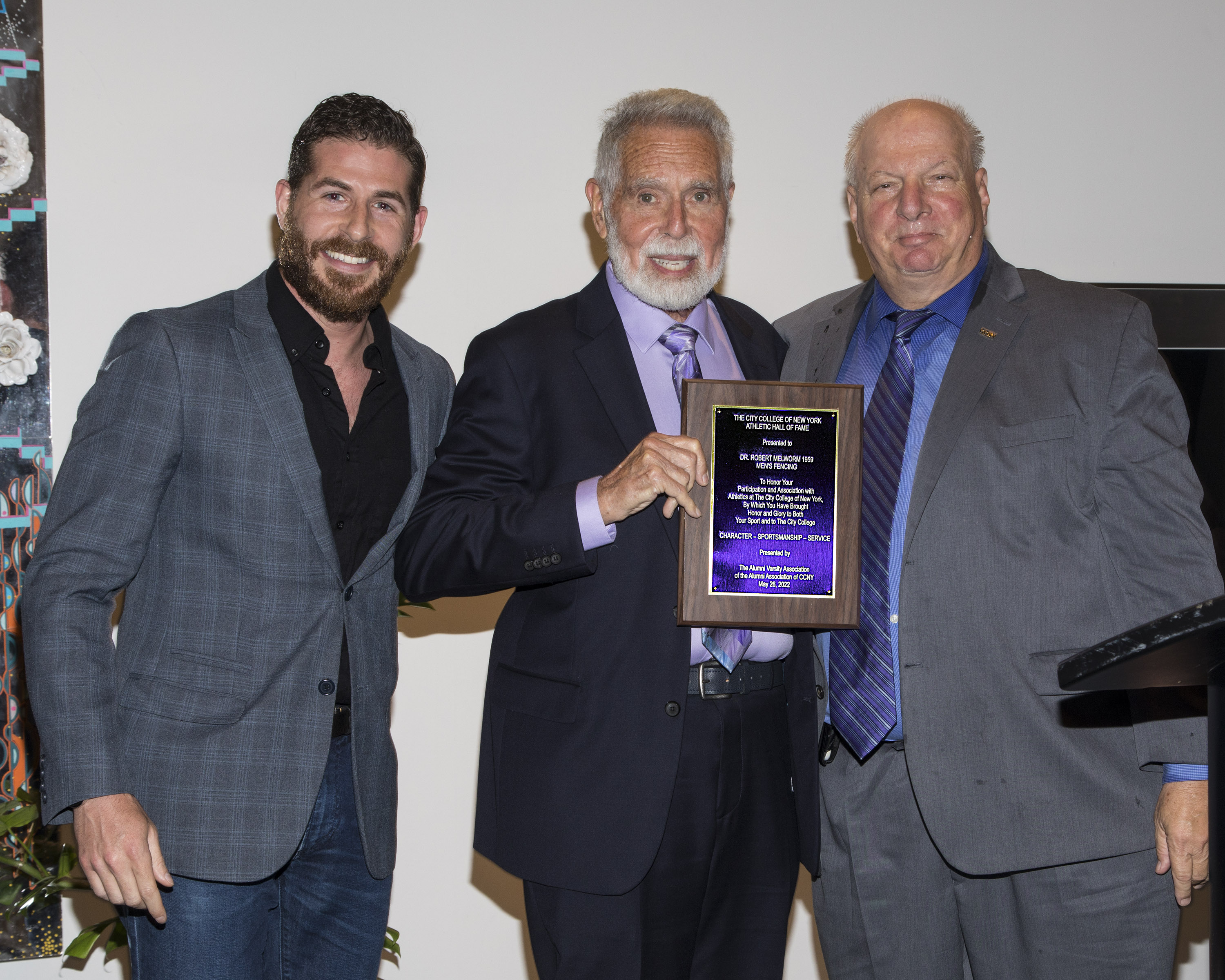 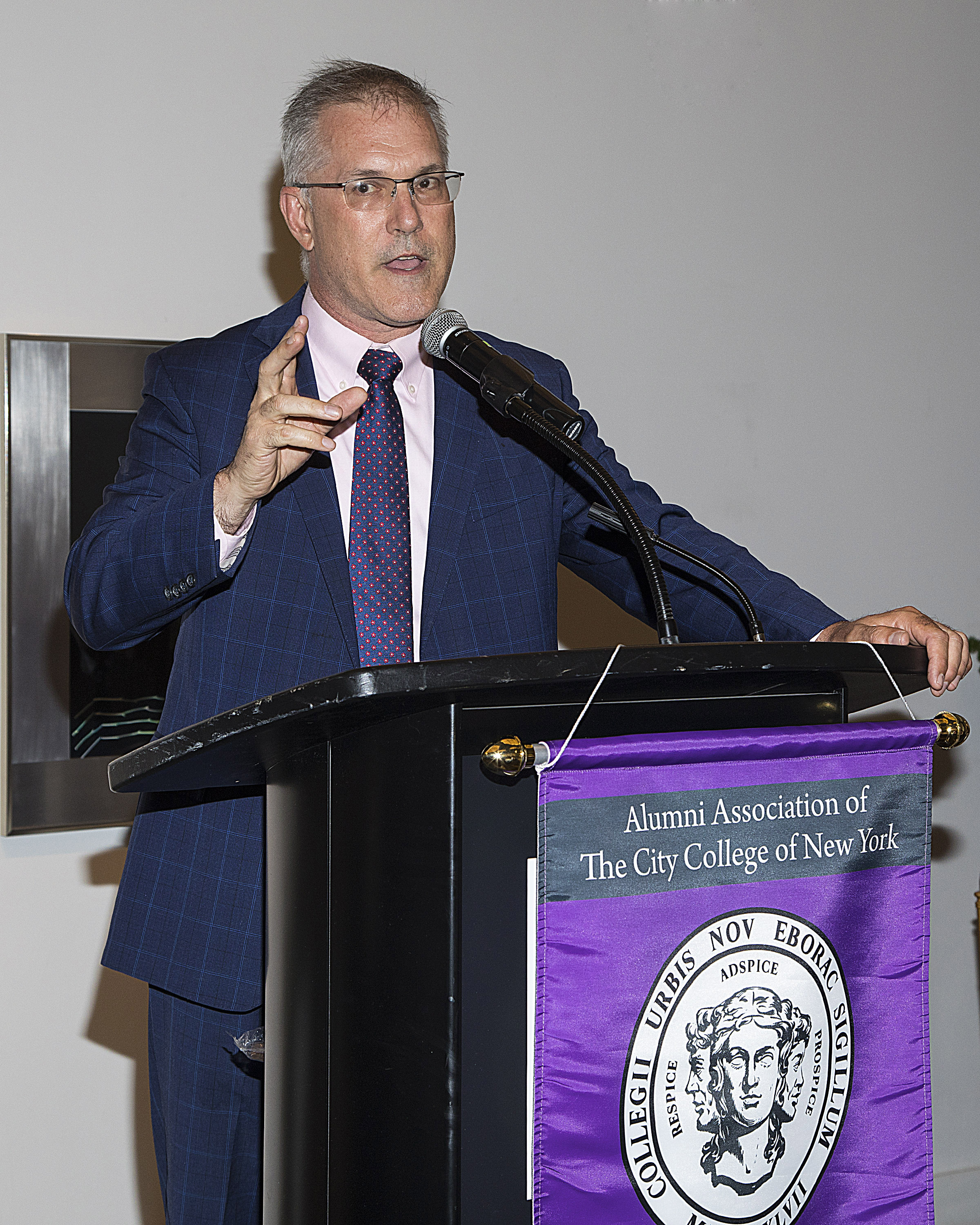 President Vincent Boudreau, who always attends and speaks at the Hall of Fame Dinner and Reunion.

The 53 Annual Hall Of Fame Dinner and Reunion

On May 26, 2022 the AVA returned to the National Arts Club to hold the 53 Annual Hall of Fame Dinner and Reunion, our first in person gathering since the Covid Pandemic. A sell out turnout of approximately 125 guest witnessed the induction of seven new members of the CCNY Athletic Hall of Fame and other presentations. Inducted were Anthony Lewis ‘15, Men’s Bassketball, Bertrand Oubida ‘15,Men’s Soccer and Track and Field, Dr. Robert Melworm ‘59 Men’s Fencing, Getachew Eschete ‘82, Men’s Track and Field, Heather Ruger ‘14, Women’s Soccer, Roger Gonzalez ‘11, Men’s Soccer, Nicole Carroll ‘15, Women’s Soccer The New York City Sports Legend Award was presented to Ice Hockey in Harlem and accepted by Malik Garvin, the Program Director. The John Stark Humanitarian Award was presented to DeeDee Mozeleski, the Executive Director of the Foundation for the City College and Senior Advisor to President Boudreau. The Mark Asa Abbott Award for Service to the AVA was presented to Victor Franco ‘68.

Each year the AVA sponsors and helps implement various sport specific team reunions, varsity vs. alumni competitions, as well as a general all-alumni reunion associated with varsity athletic events held at the College. A focus of these events are establishing personal connections between undergrad varsity athletes or recent alumni with older alumni. These connections have proven to be valuable for our student athletes as well as recent grads.

To help support the current athletics program, the AVA regularly solicits donations from the membership for our Value Fund. Money from the fund is donated directly to the athletics program to answer specific needs as requested by the Director of Athletics. The most recent donations have paid for new uniforms, shoes, equipment and awards. If you wish to make a donation to the Value Fund, call the Alumni Office for details.

In the spring of 2021, the AVA unveiled a new mentoring program for student athletes. Various board members volunteered to provide professional and personal mentoring in each's areas of expertise. The program has been carefully designed to stay within the bounds of NCAA regulations specific to Division III colleges.

The Alumni Varsity Association supports today’s varsity athletes. If you are interested in knowing how today’s teams and individual athletes are doing, click on the City College Athletics Website

Most City College teams compete in the City University Athletic Conference. Established in 1978, the conference sponsors competion and championships in many sports. Click on the CUNYAC .